What is Glaucoma ? What is Importance ? What Rate in The Society ?

Glaucoma is the number one cause of preventable and curable blindness. Glaucoma is a common but insidious and asymptomatic disease that destroys the visual nerve. In glaucoma, the pressure created by intraocular fluid (eye pressure) destroys the person’s visual nerve and causes permanent vision loss. 70 million people are currently suffering from glaucoma and it is estimated that by 2020 more than 11 million people in the world will be blinded by glaucoma. Although glaucoma is defined as “sneaky thief of the eye neredeyse, almost half of the patients know that they are sick. glaucoma incidence in Turkey is estimated at 2-2.5% of patients are estimated to have taken only one in four diagnosed. This is because, contrary to what is presumed, there are no pioneering symptoms and there are no symptoms that the patient can feel unless he or she has advanced. For this reason, the number of patients diagnosed late and lost sight is considerable. In neglected and untreated eyes, glaucoma results in permanent loss of vision (blindness).

Who Is At Risk For Glaucoma ? Who Is Seen?

Although glaucoma can affect people at any age, from infants to the elderly, the greatest risk is those over 40 and individuals with a family history of glaucoma. Its incidence is over 2%. As age increases, the likelihood of developing glaucoma increases. The risk of glaucoma increases approximately 4-6 times in patients with first-degree relatives with glaucoma. The most important and most common risk factor for glaucoma is high eye pressure. The risk of glaucoma is also increased in people who have previously been hit in the eye, those with high eyeglasses (high myopia and hyperopia), or those who have used long-term cortisone medications. In addition, eye inflammation (uveitis) and neglected swollen cataracts in the presence of eye pressure can be very high values. Although diabetes alone is not a cause, glaucoma is more common in diabetics than normal. There is no direct relationship between high blood pressure (hypertension) and eye pressure; however, the presence of very high and very low body blood pressure has negative effects on eye pressure patients. In addition, autoimmune diseases, thyroid gland diseases and vascular diseases (vasculitis) may contribute to glaucoma formation.

Normal intraocular pressure may vary between individuals. Generally, the lower limit of 9 mmHg and the upper limit of 22 mmHg are accepted. However, some individuals may have damage to the visual nerve even within these limits. Because the level of intraocular pressure may not be the only factor effective in the formation of glaucoma. On the other hand, not all eye hypertension does not mean glaucoma. Although high eye pressure increases the risk of glaucoma, it may not cause visual nerve damage and disease in some individuals (ocular hypertension).

What Are The Types Of Glaucoma

The most common secondary glaucomas are pigment scattering glaucoma (pigmentary glaucoma), neovascular glaucoma due to diabetes or retinal vein occlusion, and exfoliation glaucoma which is common in our country. 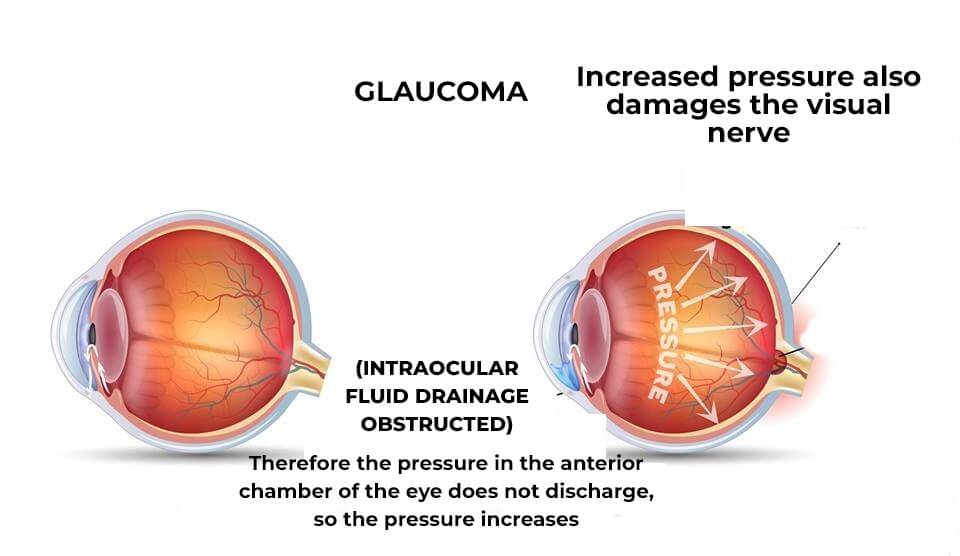 What Are The Symptoms Of Glaucoma ? How Does A Human Understand Glaucoma ?

The majority of glaucomas are in simple chronic form and do not occur with eye pain, contrary to what is supposed. The increase in pressure is considered to be caused by a decrease in the outflow of eye fluid. Since the pressure increase is generally relatively slow, the patient generally adapts to this increase and is not aware of the situation. There is no correlation between glaucoma and symptoms such as flushing-watery-itching-eye twitching. Glaucoma, which is defined as s sneaky thief of the eye başlangıçta, does not give any symptoms at first, but the person realizes that his vision decreases only after the disease progresses and visual field losses occur. Towards the final stages, the patients’ peripheral vision is narrowed and almost as if looking through a pipe (tube vision).

Less common acute angle-closure glaucoma is the rapid increase in intraocular pressure due to a sudden pause in the outflow of intraocular fluid in narrow-angle patients. This condition is also called eye pressure crisis. In the meantime, the person may have severe headache and eye pain, decreased vision, seeing colorful halos around the lights, nausea and even vomiting. If not treated quickly, it may result in permanent loss of vision or even blindness.

How Is Glacoma Diagnosed ? What Are The Diagnosis Methods?

Glaucoma can only be diagnosed with a detailed eye examination. For the diagnosis of glaucoma, it is not enough to measure only eye pressure. Corneal thickness measurement (pachymetry), anterior segment biomicroscopic examination, angle examination and dilatation of the pupil should be performed in addition to eye pressure measurement. In patients with suspected glaucoma, additional tests such as optical coherence tomography (OCT or OCT) and retinal nerve fiber thickness measurement and computerized visual field examination (perimetry) are required. The diagnosis of glaucoma may not be made with the same ease in all patients, and the definitive diagnosis can sometimes be made after a period of follow-up.

How Is Glaucoma Treated ?

Once diagnosed in glaucoma, treatment and follow-up are lifelong. Treatment varies depending on the type of glaucoma. The treatment of congenital and infant glaucoma is surgical, the place of medication is limited and if left untreated it may result in blindness.

The aim of treatment in glaucoma is to reduce eye pressure to the level of visual damage. In the most common open-angle glaucoma, treatment is performed with eye drops (medical treatment), which are regularly administered two to three times daily. However, in patients who use eye drop treatment, after a while, side effects such as redness, dryness, allergies occur. In addition, some glaucoma medications may cause undesirable cosmetic side effects such as bruising around the eyelids and darkening of the eye color, while others are not available for asthma, COPD and heart disease.

In patients with open angle glaucoma, sometimes medication may not be sufficient and may require additional laser trabeculoplasty (SLT). The aim is to increase the outflow of intraocular fluid. This method can also be used to keep pressure under control for some time, especially for elderly patients who require surgery but will not be able to remove it. In narrow-angle glaucoma, a small hole in the colored iris layer is created with the YAG laser after the crisis is controlled with drugs in people who have had an eye pressure crisis due to anterior chamber angle stenosis (laser iridotomy). The YAG laser iridotomy method is also used as a prophylaxis in narrow-angle eyes with risk of seizures.

Glaucoma is a lifelong disease, and with advancing age, the disease is often aggravated and out of control. During follow-up, your doctor may recommend surgery if your intraocular pressure is not adequately controlled by medication and / or laser, or if tests are progressing.

Surgery that reduces eye tension can be performed in the form of classical fistula surgeries, or a tube (implant) may be required to remove excess intraocular fluid. The success of physicians who have expertise in glaucoma surgery will provide a great deal of success. Close and regular follow-up of the patient is required after the operation. In advanced and some difficult cases, one may need more than one surgical intervention during his / her life.

What Are The Innovations In Glaucoma Treatment ?

Eye drops may not always reduce the pressure to levels low enough to prevent vision loss. For this reason, your doctor may recommend other current treatments. The most recent development in glaucoma surgery is “minimally invasive glaucoma surgery”. This means that, unlike traditional methods, it is applied from a very small discovery, seamless and with minimal trauma. This method is the “Gel Implant” method which has just begun to be applied in our country. The gel implant forms a small tunnel that allows the fluid to flow out to reduce eye pressure. This collagen-derived implant is a soft tube about the thickness of a strand of hair. It is inserted into the eye through a very small incision through its special injector. The operation time is approximately 20 minutes and the day of application is unity and standing. Unlike other glaucoma surgeries, sutures are not used and postoperative recovery is much faster. The “gel implant method” is especially preferred when glaucoma drops are insufficient or cannot be tolerated due to side effects. If necessary, it is possible to insert the gel implant into the eye with cataract surgery (in the same session). The success rate of the operation is high.

Private Karşıyaka Eye Hospital with the difference to regain your health.