Age-related macular degeneration known as ‘yellow spot disease’ in the community; It is an eye disease that causes severe loss of central (central) vision. Central vision directly helps the person to see the front. For example, reading, watching television.

AMD is usually seen in both eyes, but the rate of progression from eye to eye is variable. 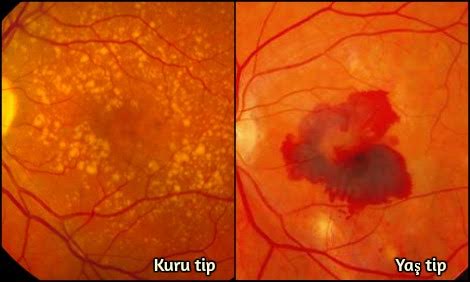 AMD is the center of the eye responsible for central vision called Macula in the region known as the Yellow Dot occurs as a result of not functioning. Although it is not known exactly what caused the deterioration of the yellow spot; aging, smoking, inappropriate diet, and family history of AMD may increase the risk.

AMD does not affect environmental vision, although patients’ central vision is impaired, but their vision is intact, so complete blindness does not occur.

In both types, the patient loses sight of the center. It becomes difficult to read books, distinguish phone numbers or money, recognize the person he is looking at, watch television.

When Should Apply To a Doctor ?

When blurring begins at the center of vision, a doctor should be consulted, especially when straight and uniform lines appear to be curved or broken.

AMD is one of the most important causes of vision loss in the population over 55 years of age. It is generally more common in women. It is more common in Caucasian race than in other ethnic groups. As the name suggests, advanced age is the most important risk factor. It occurs in about one in ten people in the 55-65 age group. It occurs in one out of two people over 85 years of age.

Are there special glasses for yellow spot disease?

With special glasses called as auxiliary vision instruments, magnifying effect can be created to increase the vision.

These glasses are called telescopic glasses. It functions as a kind of binoculars. With telescopic glasses, it is possible to see the patient far and close. However, it is very difficult for the patients to adapt to these glasses. The vision areas of these glasses are very narrow and the patient sees as if looking through the keyhole. The ratio of patients to adapt to these glasses is 10 percent. Although the central vision is strengthened, it is not possible to move and walk with the Glasses since the peripheral vision is eliminated. However, in the yellow spot disease, the patient cannot see the place where he is looking, but he can see the surrounding area. But when wearing binoculars glasses, environmental vision that makes everyday life easier is eliminated.

In some cases of delayed treatment and refractory treatment, loss of central vision is inevitable. Unfortunately, there is no other treatment option for these patients. This is usually a condition that affects both eyes. It is very difficult for the patient to maintain his / her daily life in a situation where both eyes have decreased vision.

These lenses are specially developed for AMD, aiming to increase central vision. At AMD, there is a loss of central vision due to damage to the visual cells in the yellow spot. These lenses are inspired by the Hubble Telescope and are known as telescopic intraocular lenses. The advantage is that there is no deprivation of environmental vision in telescopic glasses. Both the central and environmental vision of the patient increases.

How Do These Lens Work ?

These lenses are inserted into the eye through a very small incision, as in the case of surgery. It enlarges the existing image that enters the eye with a telescopic effect and reflects the image to a healthy area outside the damaged area of ​​the yellow dot with a prismatic effect. In other words, a new yellow spot is created for a patient.

With these lenses, patients regain their ability to drive, recognize people’s faces and read them.

Who are these lenses suitable for?

These lenses can be used in the dry type and stabilized wet type forms of AMD, as well as in some hereditary retinal diseases such as Macular holes, Stargart and Best disease, in high myopia-related macular diseases and in diabetic retinopathies due to diabetes. Some of these lenses can be used in patients who have undergone cataract surgery as well as in patients without cataract surgery. In some patients, yellow spot disease may develop years after cataract surgery. Nowadays, it is possible to increase central vision by placing a second telescopic lens on these patients.

Private Karşıyaka Eye Hospital with the difference to regain your health.